Caffeine is a naturally occurring drug found in coffee, tea, and chocolate that stimulates the central nervous system. It blocks adenosine receptors, which are responsible for feelings of fatigue. Caffeine can help improve mood, cognitive function, and alertness.

Different people respond to caffeine differently, so it’s important to find out how much you can tolerate before drinking caffeinated beverages. Turkish coffee is a type of coffee that is brewed with sugar and served with grounds still in the cup. Is Turkish coffee caffeine more than other types of coffee? Is it good for the drinkers? Can we make it at home? Let’s find down with us.

What is Turkish coffee?

Turkish coffee is a type of coffee that originated in Turkey. It is made by grinding coffee beans into a very fine powder and then mixing them with water to make a thick, concentrated coffee. Turkish coffee is typically served with sugar and spices, and it is often drunk slowly in small cups.

The history of Turkish coffee?

The first written record of Turkish coffee comes from a 16th-century travel book, which described it as “black as Hell and sweet as Heaven.” Turkish coffee became popular in the Ottoman Empire, and it is still widely consumed in Turkey today. It has also become popular in other countries in the Middle East, Europe, and North Africa.

How is Turkish coffee made?

A tiny pot known as a cezve (about 2.5 ounces) is used to brew Turkish coffee, which uses a teaspoonful of finely crushed coffee in a cup of boiling water. The mixture is stirred until it boils again and then removed from the heat to settle. After a few minutes, the grounds will have settled at the bottom of the cup.

A delicious cup of Turkish coffee is usually served with a glass of water and a piece of Turkish delight.

Not all Turks enjoy sugar, and Turkish Coffee may be prepared to taste.

How much caffeine is in a cup of Turkish coffee?

Turkish coffee isn’t filtered like drip coffee and espresso or strained like with a French press, so the grounds remain in the cup.

When coffee is prepared in this way, all of the caffeine remains in the cup. This means that drinking Turkish coffee can give you a strong caffeine buzz. If you are sensitive to caffeine, it’s best to avoid Turkish coffee or limit your intake.

How does Turkish coffee taste?

Is Turkish coffee good for you?

Turkish coffee can have some health benefits due to Turkish coffee contains more caffeine than other types of coffee. Caffeine is a naturally occurring drug found in coffee, tea, and chocolate that stimulates the central nervous system. It blocks adenosine receptors, which are responsible for feelings of fatigue.

It can help improve alertness, mood, and cognitive function. It can also help to temporarily boost physical performance. However, too much caffeine can lead to side effects such as anxiety, jitteriness, and insomnia. Therefore, it is important to find out how much caffeine you can tolerate before drinking Turkish coffee.

Is Turkish coffee stronger than Espresso?

Yes, Turkish coffee is usually stronger than espresso. A typical cup of Turkish coffee will be higher in caffeine than a regular espresso – 75mg compared to 55mg. Because the coffee beans used to produce Turkish coffee are generally roasted longer than other types of coffee beans, which may contribute to a more robust flavor, this is the case.

Turkish coffee is often prepared with a greater proportion of coffee to water than espresso. Unfiltered Turkish coffee isn’t as concentrated as espresso. The process of making espresso involves forcing one to two ounces of 190-plus-degree water through grams worth of finely ground coffee.

The stimulating effects of Turkish coffee come from the high heat, small grind size, and low water-to-coffee ratio. However, because the caffeine content in Turkish coffee can vary depending on type of bean used and how finely it is ground, it is difficult to say that Turkish coffee always has more caffeine than espresso.

Read more: How Much Caffeine In Nespresso

How does this compare to other caffeinated drinks?

As we said before, a cup of Turkish coffee can have anywhere from 30 to 150 mg of caffeine. In comparison:

– A cup of drip coffee has about 95 mg of caffeine.

Is decaf Turkish coffee an option?

Yes, there are decaf varieties of Turkish coffee available. Decaf coffee is coffee that has had most of the caffeine removed. However, it still contains a small amount of caffeine. If you have caffeine sensitivities, it is better to drink regular Turkish coffee or consume less decaf.

How to make a cup of Turkish coffee

There are a few things you’ll need to make a cup of Turkish coffee:

-1 tablespoon of coffee per cup

-A pot or cezve specifically for Turkish coffee

To make Turkish coffee, start by adding one tablespoon of coffee per cup of water to your pot or cezve.

– Then, add enough water to come just below the level of the coffee grounds.

– Next, stir the mixture and place it on the stove over medium heat.

– Once the mixture starts to boil, remove it from the heat and let it settle for a minute.

– After it has settled, skim off the foam from the surface and return the pot to the stove. Boil the mixture again and remove it from the heat.

– Let it settle for a minute and skim off the foam.

– Repeat this process until the coffee is no longer foamy.

– Finally, pour the coffee into cups and enjoy!

How much Turkish coffee can you drink per day?

The FDA, the European Food Safety Authority, and Canada’s Department of Health recommend that adults consume 400 mg of caffeine per day. This is the equivalent of about 4 cups of coffee.

However, everyone’s caffeine tolerance is different. If you are sensitive to coffee, you should avoid Turkish coffee or restrict your consumption. Excessive amounts of caffeine can induce a variety of unpleasant symptoms, including headache, severe acid reflux, elevated heart rate, increased thirst, and fever.

As a result, it’s critical to discover how much caffeine you can handle before consuming Turkish coffee.

What is the difference between Turkish coffee and Arabic coffee?

How do you drink Turkish coffee?

Turkish coffee is known for being a high-caffeine drink. In fact, Turkish coffee caffeine is more than most American coffees. If you’re looking for an energy boost and a delicious and aromatic drink, this may be the perfect drink for you. However, if you’re sensitive to caffeine or are trying to avoid it, Turkish coffee may not be the best choice for you. When made correctly, Turkish coffee is a flavorful and enjoyable experience. So take your time, enjoy the process, and savor the taste of this unique coffee.

Is Turkish coffee the strongest coffee?

No, Turkish coffee is not the strongest coffee. In terms of caffeine content, it falls somewhere in the middle. However, its unique flavor and aroma make it a favorite among coffee lovers.

Why is Turkish coffee so strong?

The strength of Turkish coffee is due to the fact that it is made with finely crushed coffee beans. This allows for greater extraction of the natural oils and tastes from the coffee bean, resulting in a more intense drink.

Which coffee has the most caffeine in?

There is no definitive answer to this question because it depends on the type of coffee bean, the grind, and the brewing method. Generally speaking, however, dark roast coffees tend to have more caffeine than light roast coffees.

Can you have Turkish coffee when pregnant?

There is no definitive answer to this question. Some people believe that Turkish coffee is safe to consume during pregnancy, while others believe that it is best to avoid it. Ultimately, it is up to the individual to decide whether or not they want to drink Turkish coffee while pregnant.

What coffee is stronger than espresso?

How does Turkish coffee keep refilling?

The most common way of preparing Turkish coffee is to boil water and ground coffee together before pouring it into a cup. The cup is usually placed on a saucer, which has a small hole in the center. As the coffee cools, the liquid contracts and is drawn back down into the cup through the hole in the saucer. This process repeats itself, causing the coffee to keep refilling.

Why is Turkish coffee so thick?

The grounds for Turkish coffee are so fine that they resemble powder. This allows more of the coffee bean’s natural oils and flavors to be extracted, resulting in a significantly thicker drink than most other types of coffee.

How long does Turkish coffee last?

Once prepared, Turkish coffee will last for several hours. However, it is best to consume it within a few minutes of brewing to enjoy the freshest flavor.

What is the difference between Turkish coffee and Greek coffee?

How many calories are in Turkish coffee?

There are approximately 2 calories in 1 cup of Turkish coffee.

Nespresso Troubleshooting – Is Your Nespresso Machine Not Working?

Pros and Cons of Coffee – Is Coffee Bad for You?

Keurig Won’t Turn On – Why Is This Happening?

How Much Creatine Is In Bang – What is the Best Time of Day to Take Bang Energy? 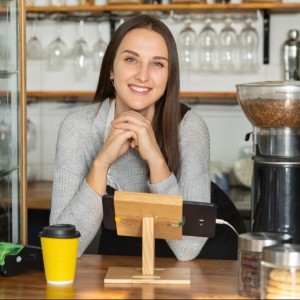 I'm Stephanie Philpot, Main editor and writer at identitycoffees. I have always been passionate about coffee, from the time I first tasted it. I love learning about all aspects of coffee: from the growing and harvesting to the brewing and roasting. I want to share my experience, receipts, knowledge, and more with everyone who is interested in learning more about this amazing drink. Coffee is more than just a morning ritual for me; it's a passion that I want to share with as many people as possible.

You May Also Enjoy These Articles

​​​​​​​Coffee is a beloved drink enjoyed by many. Some people like to enjoy their coffee black, while others add cream

Nespresso Troubleshooting – Is Your Nespresso Machine Not Working?

Do you own a Nespresso machine? Chances are if you do you know that it makes some of the best

Is your black and decker coffee maker not working? This can be a real pain, especially if you need your

Do you own a Keurig coffee machine? Then you know that it’s important to descale it regularly in order to

Keurig coffee makers are one of the most popular brands on the market, and for good reason. They make a

Pros and Cons of Coffee – Is Coffee Bad for You?

Coffee is one of the most popular drinks in the world. It’s consumed by people of all ages, religions, and Keurig Won’t Turn On – Why Is This Happening?

If your Keurig won’t turn on, don’t worry – you’re not alone. This is a common problem that many people

How Much Creatine Is In Bang – What is the Best Time of Day to Take Bang Energy?

Creatine is a popular supplement that is taken by many people to improve their performance. How much creatine is in